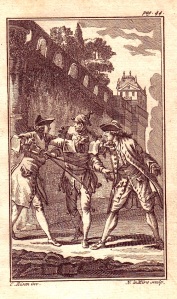 This recently re-discovered transcript by an anonymous German noble could fill an important gap in the documentation of German fencing approaches between Paschen and Schmidt.

Under the sponsorship of the new Administration, we’re preparing a limited release of the manuscript.

Several years ago, we located a transcript contained in the works of the Austrian fencing master and fencing historian Karl Lochner, which represents a unique and unparalleled approach to swordplay as a pure self-defense and dueling skill.

“The author’s use of fencing terminology indicates that he was well-versed in the Italian and perhaps French methods of fencing as they are reflected in the fencing literature of the 17th and early 18th centuries. However, it is difficult to pinpoint where his knowledge originated.

“[The anonymous author] compares the art of fencing to a craft (Handwerck) and decides it is not, but rather an obscure science comparable to alchemy.

“His dismissive references to fencing masters in general, and some French and Kreußlerian mannerisms in particular, lead me to believe that he had hands-on experience with both. He anticipates (or possibly echoes) Friedrich Anton Kahn, who in 1739 wrote about the quite literally misguided fencing student, whose

“However, it is his reference to ‘einge Jentscher‘ (“some people from Jena”) in the context of the forward inclination of the upper body, sub-headed [Das Vorbeugen des Oberkörpers] by the transcribist, which may indicate his familiarity with the early Kreußler school in Jena. This would put the origin of this writing into the latter half of the 17th century.”

We will be making our analysis of the text, as well as a verbatim transcription of the original and an annotated English translation available on this site within the next couple of weeks.