Gratuitous Violence: The Tough Guy’s Guide to getting things DONE! 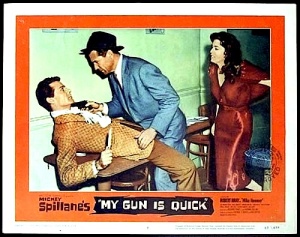 World War II put a temporary dent into the popularity of Asian martial arts in America that “jiu jitsu” had briefly enjoyed in the 1920’s and 1930’s. It wasn’t until the aptly titled “chop sockey” movies out of Hong Kong that Western audiences reconnected with the highly stylized if not artistically choreographed exotics. Until then, the shortest way from Point A to Point B was a straight right to the chops…

Sick of the neo-Puritan prudery of liberal political correctness? Me, too! Thankfully, the pulps of American grandmaster of honest-to-goodness violence, Mickey Spillane, still provide a breath of fresh air, half a century after they were written.

For those interested in the history of martial arts, these simple and brutal yarns occasionally provide a glimpse into an era when the depiction of fight involved less acrobatics and more common sense. When people cared little about the distinction between judo and karate, sneered at “judo chops” and un-American fighting…

The following passage was lifted from Mickey Spillane’s short story “The Bastard Bannerman,” first published, appropriately, in a 1960’s men’s magazine, and then as part of a paperback collection entitled The Tough Guys by  Signet in ’69. Later repackaged as part of a Tiger Mann novel, the story features an Italian-American friend of the Bastard, Petey Salvo, a.k.a. Woppo—which in itself is worth the price of admission. 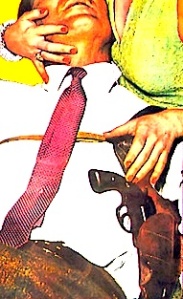 “It that a gun in your holster or are you just happy to see me?”

“If you’re looking for a smack in the chops you’re going about it the right way, buddy.”

His smile was hard and the curious glint in his eyes painted the picture nicely. The casual way he walked up didn’t hide the sudden bunching of muscles under his coat. He said, “Am I?”

And before he could start the judo chop I belted him in the damn mouth so hard the skin of my knuckles split on his teeth and he rolled twice before the couch stopped him and he looked up at me with a face full of hate as big as your hat. He was one of those over-confident types who had put in too many hours in a gym wearing a Jap toga and practicing un-American fighting and he forgot about a straight right to the kisser. Hell, I’d had it out with dozens of those types before. “The next time I might shoot you, Vance.”

I pushed my coat back to get a handkerchief for my hand and let him see the .45. He didn’t answer. He kept both hands to his hands and tried to sit up…

Here’s more hard-boiled American tough guys… this one by Hammett!

3 responses to “Gratuitous Violence: The Tough Guy’s Guide to getting things DONE!”