One of the leading search terms that brings novice FencingClassics readers to our site is “topless fencing”.

And since we thrive on giving people what they want, we’re happy to oblige… with images of duels between women in various stages of dress and undress…

Baltimore, MD—Oh, puh-lease, spare us the high and mighty. Even the most explicit 19th-century images in the Amberger Collection don’t even get close to the degree of nudity available in a dentists’s waiting room magazine spread in Europe.

(I ought to know, because I grew up in one.)

In fact, we promise you’ll see more breast at a Boston Market or other purveyor of fine rotisserie fowl than in the following pictures.

Thanks for the mammaries

Photographic postcards and, toward the end of the 19th century, stereoscopic views of sword-wielding female nudes were a logical continuation of artistic conventions expressed in drawing, painting, and sculpture. Until the late 19th century, however, women’s roles in affairs of honor were restricted to that of spoilsport—breaking up a fight before it had begun—or wailing woman: A pretty girl crying over the mortal coil her lover was about to shuffle off. It was only in the late 1800’s that the women started taking a more pro-active role in artistic dueling. At least on paper.

(To increase cup size, just click on the images.) 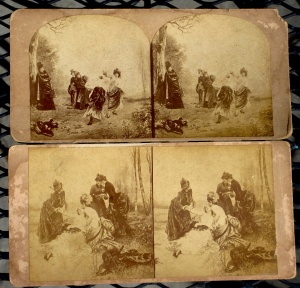 Indeed, our collection contains two specimens of stereoscopic views of photographs depicting Émile Bayard’s oil paintings “An Affair of Honor” and “Reconciliation.” Published by R.K. Bonine of Tyrone, Pennsylvania, as part of their Art Series (“for the admirers of fine Art works, and particularly for those who have not the opportunity to see the original painting”), we figure the main attraction of the originals and the photographic “3-D” reproductions were two sets of particularly fine mammaries.

Domenico Mastaglio’s Duel des Femmes, too, got a second wind as postcards and especially colored postcards proliferated. (This specimen dates from 1905.)

For the fencing historian, this genre has the same value as descriptions of sword fighting in contemporary literature: Small to non-existent. Like in paintings or sculpture, models were posed and arranged for dramatic effect rather than with an eye for authenticity. Indeed, if there’s any documentary value to them at all, it’s mainly to demonstrate how little the average artist knew about fencing and dueling, even in the heyday of these art forms. 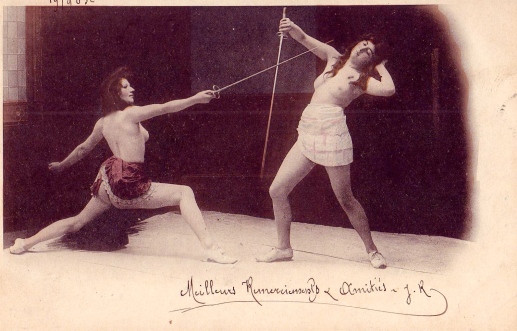 Photographic postcards and stereoview cabinet cards often told stories in sequences of up to a dozen scenes. In a way, you could consider them the direct ancestors of the silent movie: Both media had to convey complex action and implied dialogue by posing and gestures. Retelling these stories is made difficult these days, as most specimens circulate as singletons… such as the image above, whose elegant, cheek-revealing lunge represents a scene in the archetypical pattern of offense and challenge, duel, and death with or without reconciliation.

Apart from the obvious voyeuristic attraction inherent in depictions of nude females, there was often a melodramatic if not moralist undercurrent in the picture series. Duels, after all, were frowned upon, especially among the educated classes, and provided never-ending fodder for reverends and preachers to issue tome after tome of anti-dueling literature.

The following story was published in America in 1899, as yet another stereoscopic “3-D” storyboard, this time sans nudity. Weapons used in the photographs are foils, as in the French images above. (The scanning of these old cards is difficult because of the warping of the cardboard stock. Hence, we’ve chosen to show only relevant selections.)

The following incomplete sequence has more documentary value than most others, inasmuch as it depicts the detailed preparations in the arranging of an affair of honor. Especially interesting, to an old épée fencer and collector like myself, are the dueling weapons selected.

(And I have no doubt that feminists will be all-too-happy to jump on the emancipatory implications of womyn usurping the sphere of the patriarchy, its notion of honor and martial resolution of conflict: All dueling sequences involving women that I’m aware of take place in a women-only environment.) 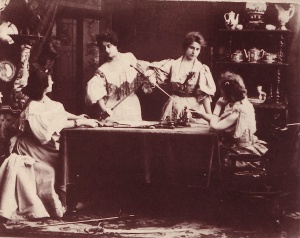 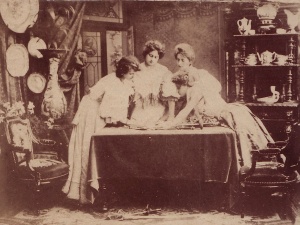 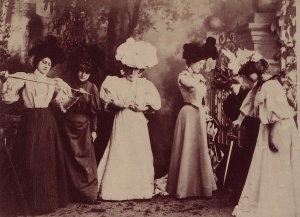 We’ve seen the full sequence before and are relatively sure that partial frontal nudity, mayhem, and death will ensue, but the three albumen prints that somehow escaped being pasted to cardboard stock are what we have in our collection. Should you have additional images, we’re happy to supplement our story line appropriately… or inappropriately, as the case may be.

When that happens, we’ll let you know—the easiest way to notify you is having you sign up for our blog email notification list… which you’ll find right below the attractively short skirt on the right-hand column of this page. 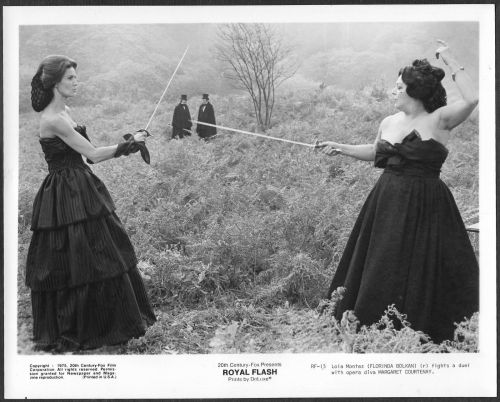 Flashman may have let a life of prolific mammary palpitation, but the dueling dames in the movie left everything to the imagination.

Post-script: In the meantime, if you’re looking for more (or more or less) beckoning brawling bodacious babes in bodices, Check out the Collection of additional dueling dames and broadsword broads that our Russian friends have collected to supplement our only borderline modest efforts.