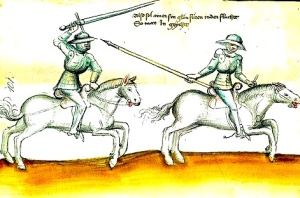 For some reason, we missed the publication of this great resource two years ago.

Baltimore, MD—I must be getting old. Because it took a Berliner friend to send me a newspaper review of this 2010 publication to alert us to its very existence… and a call to dear old dad (“Vater, schick’ mal!”) to get us a review copy.

But let’s back up, buttercup.

Back in the last two decades of the 19th century, the Viennese fencing master Gustav Hergsell did yeoman’s work self-publishing the first photographic reproductions of several of the codices ascribed to the grand old master Hans Talhoffer. The production of the plates alone must have cost him a mint—and was rewarded by excoriating reviews at the hands of the curmudgeonly grand wizard of European Martial Arts historiography, Dr. Karl Wassmannsdorff.

One Talhoffer original, however, remained inaccessible to every but the most dedicated researchers: The Königsegger Codex. Owned and guarded by the same family who commissioned it way back when, it remained elusive.

Until 2010, when Mainz-based publisher Philip von Zabern, in collaboration with medieval martial arts specialist André Schulze obtained permission to craft a monumental reproduction and commentary on the Codex.

The production resulted in two volumes, one a glorious, hi-res photographic facsimile of the actual codex, covers and all. The other an eminently qualified transcription, commentary, and placement in historical and bibliographical context by André Schulze, who also provides a first-class practical interpretation of the techniques depicted.

One special aspect of this manuscript is that it depicts a play-by-play of Junker (Squire) Luthold von Königsegg’s ordeal… a combat to the death depicted in all its bloody splatter—as close to 15th-century Reality TV as you can possibly get.

You could order it through German amazon.de. But we recommend you place your order for this book, and maybe half a dozen others by Schulze, right here on the publisher’s web site. Look for the red banner that says “In den Warenkorb” to place your order in the shopping cart.

The book isn’t cheap at 50 euros—around $65 at current exchange rates. But quite honestly, it shouldn’t be cheaper: This is a perfectly adequate price for the quality of this production! Because in scope and attention to detail, it’s as important, if not more so, than Hergsell’s groundbreaking work.

(Plus, I’m all for supporting publishers who still aim at producing legacy products, rather than going the Lulu way.)