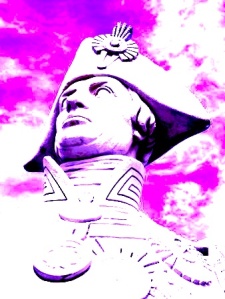 To the hardcore xiphomachophiliac, there’s only one thing better than finding a great old sword.

Looks like an enterprising diver and treasure hunter has entered sword nirvana. He claims to have found a sword in an ancient shipwreck.

A sword that can be traced back directly to Admiral Nelson…

We freely admit that time and over-use of our ganglia has long eradicated our ability to tell where the adventures of Horatio Hornblower end, and where the biography of Horatio Nelson begins. We also admit that we don’t give a “harrumph-harrumph” about our shortcoming.

“British diver Mark Ellyatt was part of a team that discovered the shipwreck of the HMS Victoria warship, which sank in 1893 off the coast of Lebanon, in 2004, The Daily Telegraph reported Sunday.

“Now, Ellyatt said he has located the ship’s admiral’s cabin, which contained a number of items he believes belonged to Nelson, Britain’s most celebrated naval hero.”

Among them… you guessed it!