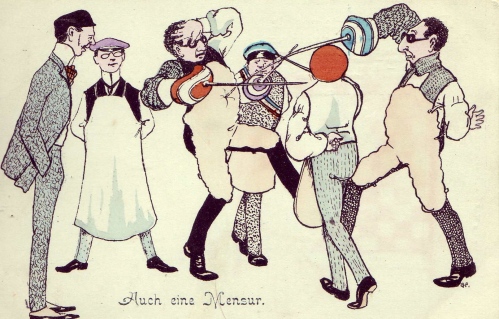 This humorous postcard from the  Weimar Republic loosely translates to “That’s a Mensur, too”

At German universities before and after World War I, Jewish Germans like Theodor Herzl organized in duelling fraternities. Their customs, including the Mensur, were modeled closely after those of “regular” fraternities. Several high-profile duels of the period prove that, by and large, their important social attribute of Satisfaktionsfähigkeit was acknowledged by ethnic Germans.

This anti-Semitic postcard from the interwar period is a German cartoonist’s idea of how a Mensur between two Jewish fraternity students might have looked like. Both the use of the point and the of the unarmed hand were and are  considered gross irregularities during a Mensur.

There is no indication at all, however, that Jewish Verbindungsstudenten fenced any worse than their compatriots.

But the smug looks on the faces of seconds, doctor, and umpire could indicate that this Mensur is a bout between “Finken“—students unattached to a fraternity—who have requested Waffenschutz (protection at arms) from two local corporations to settle a difference of opinion with Schlägers. A fraternity would train the applicant and provide weapons, seconds, and the infrastructure necessary for a Mensur.

Since the training period would have been short, the expectations at the quality of such a Mensur, and the correct behavior of the fencers, would be low in any case.

This entry was posted in 20th Century, fencing, Schläger and tagged anti-semitism, mensur. Bookmark the permalink.