This clip was filmed off an original French flip-book (Fr.: folioscope or feuilletoscope) by TodaysFinancialNews.com videographer Andy Robinson. It constitutes one of the first short animated documentary sources on the sequence of movements actually used in 19th-century fencing.

Note the frequency of cuts to the leg and ankle, as well as the moulinet feints preceding actual cuts. This, as well as other images on this site, prove that modern target restrictions are a recent invention, not part of hallowed tradition. (Of course, I already beat that point to death ten years ago in The Secret History of the Sword.)

Of particular interest to me is the right-hand fencer’s cut to the inside belly, followed with a deliberate draw cut across the full front of his opponent.

The weapons used look too long, too light, and too straight to be proper period fencing sabers. (Especially the guard looks awkward.) My guess is that, for the sake of taking the 120 photographs that make up the sequence, the photographer was forced to chose oversized, light-painted wooden weapons to make their motion better visible against the dark background.

The speed of the sequence is an educated guess. Running through the flip-book itself inevitably provides a jerky and overly fast impression. Videographer Andy Robinson did some reconstructive math on the number of images per second. Right now, the speed is at about 10 images per second… and I think it looks about right.

This video is a first rough draft. We may actually be able to produce a less jerky sequence. Pay-per-view, here we come! 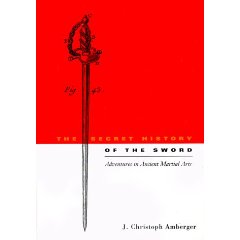 ***Looking for more spine-tingling, hair-raising revelations about European edged-weapons combat, sword fighting, dueling and fencing? Try The Secret History of the Sword… “Simply the liveliest book about fencing I have ever read” (Richard Cohen, author of By the Sword).

*** What is this blog all about? It’s part of FencingClassics’ fencing history program.